Typically I’m not the kind of person to intercede and correct another persons child.  However, if your kid is on the verge of harming themselves or another child, this mama has no problem stepping in if you are not to be found!  With that said, you can probably guess what happened today!

This morning, Sugarpie & I took a trip to the local childrens museum, which is a pretty amazing place for kids to run and play.  Most parents tend to hang close by their children as it’s a pretty large place which makes it super easy to lose track of them.  We started off playing in an area meant for babies and as S enjoyed herself, I noted the other mamas around me.  There was one in particular that was tall and slender, and came across as calm and full of zen as she spoke to one of her fellow mama friends.  She had dark hair that was knotted up in a perfect bun on the top of her head, and though she wore no makeup, it was clear by her complexion that it didn’t matter, it was flawless.  She seemed to have many qualities that I feel like I’m always striving for.

Fast forward fifteen minutes later.  S had made her way out of the baby area and into a pretend diner.  As she played, or attempted to, I noticed that there wasn’t really any play food to be found so she quickly moved on to a car repair area.  Suddenly from afar I heard a boy scream, “GET AWAY BEFORE I KICK YOUR BUTT!!!”  A few minutes later, I realized that all of that missing food from the diner (and the supermarket play area beside it) had been taken by three older kids and shoved up a play tree trunk.  The boys were guarding the food in the trunk like rabid squirrels who had just collected enough nuts for the winter.  (and yes that’s just a metaphor because I am aware that squirrels don’t shove their stashes up tree trunks)  Two other boys were attempting to play and the gaggle of three began calling them “butt heads” and chasing them away from their stash.  Things got intense, and one boy got kicked in the head by a rabid squirrel boy and began crying profusely.  Their two moms began whispering, “where are these boys parents?! who do they even belong to?” and then started calling for their kids to leave that area and specifically said to them, “do NOT go near those boys down there!”  This all happened in a matter of minutes and I was really annoyed that nobody was aware of what a scene their children were causing!

Naturally S decided that she wanted to go play on the slide which just happened to be over top of where the evil squirrel boys were hoarding their stash.  I let her play but decided to stay very close by in case of an eminent squirrel boy attack.  All was good….at first. AND THEN, of course, one of them decided to emerge from the cave and quickly climbed up the ladder, pushing passed S and was just about to fly down the slide (that I just so happened to be standing right up against) when I noticed that a little girl was at the bottom of the slide trying to come up.  Instinctively I put my arm out in front of squirrel boy and said “wait a second! You’re going to knock her down, let her move first!” to which he said, “I don’t care she’s mine!” and started to go.  I grabbed his arm (nicely- not aggressively) mid-slide and kept saying “you’re going to hit her, stop!”  Suddenly, just like that his mother appears and doesn’t say, “thanks for stopping him” or anything nice or appreciative.  Instead she snaps at me, “He’s fine! This is his sister!”  (Because apparently it makes it totally ok for your kid to knock the crap out of someone if it’s his own sister) I look up and who was his mother? That calm, zen filled beauty I saw thirty minutes before, hanging out on the other side of the museum.  Turns out that you really cannot judge a book by their cover! Then I heard her friend mutter, “she obviously didn’t realize that you were right here!”

The museum has a small train that runs inside and on our way out, S and I decided to stop for a ride one last time.  We happened to ride in the same seat that the rabid squirrels sat in previously.  They left their snack trash on the seat  and I begrudgingly picked it up in my hands, while imagining myself chucking it at Mrs. Unaware! As we turned the corner for our last stop I KID YOU NOT, there were the two rabid squirrel boys waiting in line to go again with their faces pressed through the metal bars licking them up and down with mama no where in sight.

How do you handle things when children are in public and are acting wild and unruly when their parents or guardians are nowhere to be found? 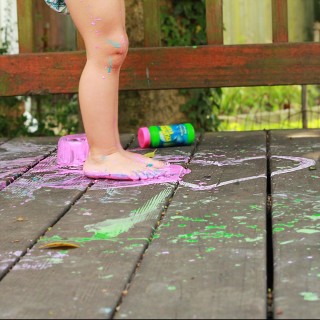 A 30-something year old stay-at-home mama to one sweet & sassy girl, Sugar Pie and two moody fur babies! I'm also married to the Patron Saint of Patience who I'll refer to here as P-SOP. (maybe, I change my mind hourly) Before Sugar Pie was born, I was an art teacher and it's just in my blood to make and create things. You will learn soon though that there is one thing I suck at making- humans. I love coffee, art, photography (it was my major in college right before the dawn of digital photography), gentle parenting, baking, cooking, open-minded people, DIY everything, running, kind people, pumpkin everything, and shiny, happy people (holding hands, of course). I do not like doing the dishes, putting away laundry, worrying, negative energy, or sardines.